Enjoy the photos of the dogs and cats who traveled to Colorado last week to find their new homes. They were a rambunctious bunch, excited to get on the road and loaded under the watchful eye of Ruger. 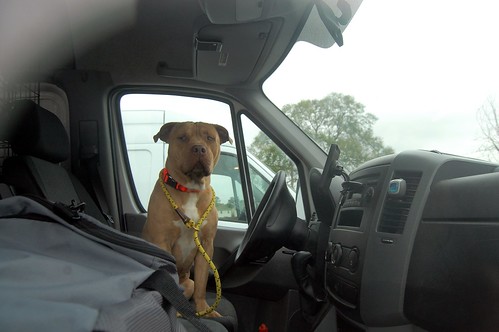 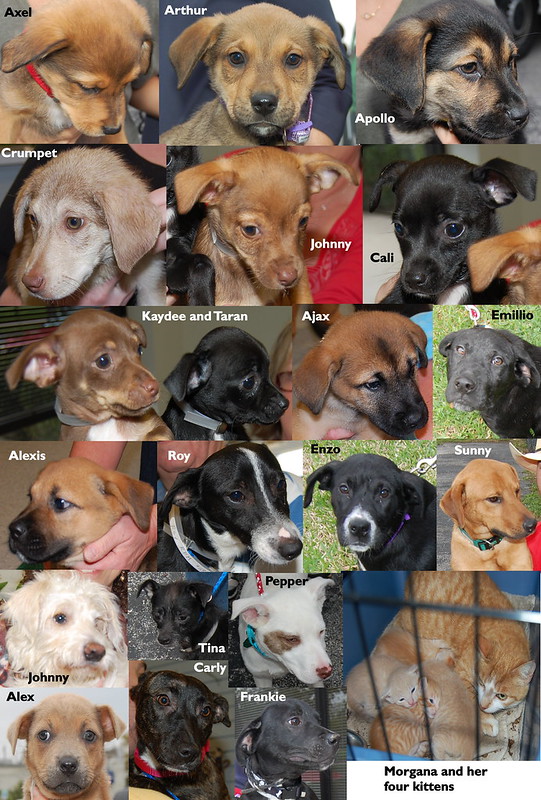 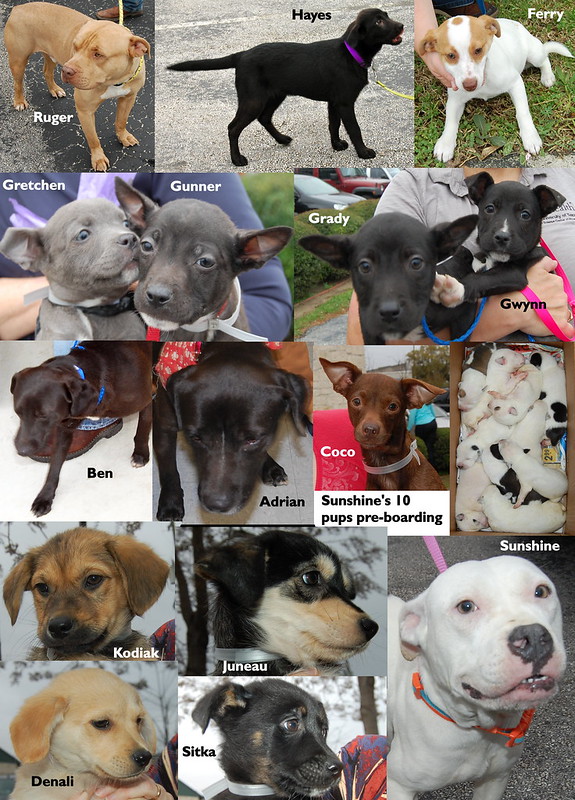 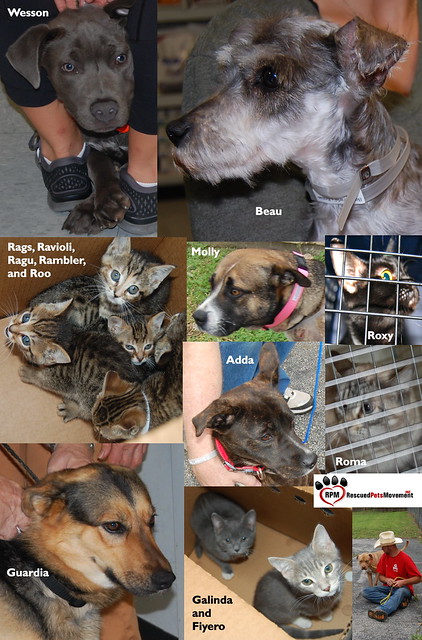 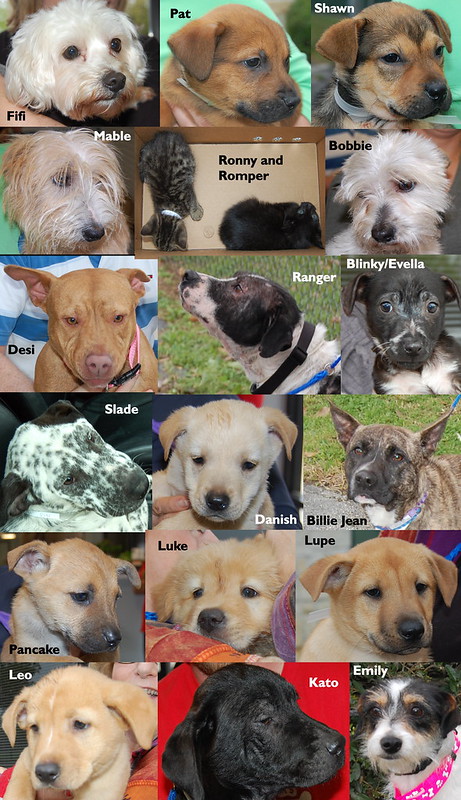 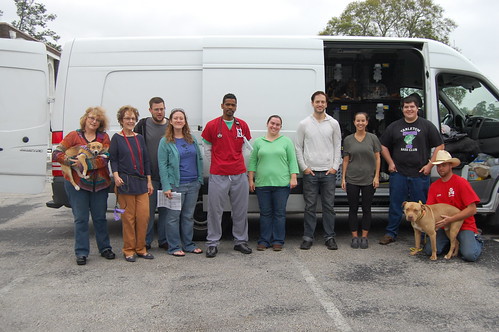 The fosters, transporters, and organizers were coming and going quickly and very busy, but we were able to get a few to stand still long enough for a group shot. RPM’s success in its partnership with BARC depends on our volunteers, boarders, vets, and donors, and we appreciate you all–and so do more than 1600 (and counting!) dogs and cats!

Back in the beginning of January we had word from BARC that they had a dog with a leg injury that needed immediate attention, none of the other groups that they had reached out to would take him, and we would be their last resort to help. Well, of course we’d take him! It was Transport Day, so instead of going to our loading location, I made a detour to BARC to pick up Wally so I could take him to one of our partner veterinarians. Wally was a sad, forlorn yellow labrador retriever mix. I held him gently as I carried him outside and then carefully maneuvered him into the crate in my car. When we arrived at the vet, I kissed his nose and said, “Don’t worry, Wally. You’re going to be okay, I promise.” Wally responded by peeing on me when I picked him up again. He was in pain and scared, so I forgave him.

What we thought was a basic leg injury turned out to be a broken hip. Wally had probably been hit by a car. Poor guy. It was beyond our vet’s capabilities and they recommended he see a specialist. We had a very frustrating time trying to get an appointment with a specialist. No matter who we called, cost was an issue (we couldn’t afford them/they wouldn’t give us a discount) or they wouldn’t be able to see him for over a week. Wally didn’t have the luxury of time. We didn’t know how long he’d been living with the injury. If we waited any longer, his bones would start to knit improperly. We had a good foster home lined up for him already, so we were incredibly annoyed that we couldn’t find someone to work on Wally right away at a reasonable cost. I was pretty upset, because I had promised Wally he was going to be okay. I didn’t want to let him down.

Luckily, we called Dr. Mandola at Richmond Animal Hospital and he said to bring Wally to him right away so he could do whatever possible to help him. When we asked him how much the operation would be he said he’d charge whatever we thought was fair. Since I felt a kinship with Wally, I volunteered to drive him to Richmond to meet his new foster mom, Shelley, and Dr. Mandola. He had an operation that day, and Dr. Mandola said Wally had been brought to him just in time. As we suspected, if we’d waited any longer, it would’ve been next to impossible for him to break the bones again, set them properly, and stitch him up again. Later that day, Shelley brought our FrankenWally home with her, ready for the long road ahead of getting Wally back on his feet again.

Took Wally for his first week check-up today…He cleaned up Wally’s wound area–Wally’s been licking it but I got him a cone of shame–and gave me some antibiotics…His eating is still slow but he does eat. I’m hoping the pain medicine will help his comfort therefore he’ll feel better to eat. Everything else is good. Seems to be slowly getting better. We’re taking it one day at a time.

Wanted to send out an update on Wally. I took him to the vet yesterday and he had a small fever and an infection around the pin in his leg. The vet gave me antibiotics to give him twice a day for a week. I also had to get an antiseptic cleaner to clean the wound twice a day. A few days ago he was a little depressed but that was most likely due to the infection. But in the last 24 hours since starting the antibiotics he’s perked up a little. He’s pretty much on 24/7 crate rest with the exception of going outside. I take him back next Friday and they will decide then if the pin comes out. Vet said pin will come out at 3-4 weeks and they’ll take an x-ray to see how it’s healing. I’ll keep everyone posted on when the pin comes out and what the treatment/therapy is at that time. He’s a great little dog! Very sweet and just loves to stand next to you and have you pet him. It’s a good thing you guys didn’t give up on him, he’s gonna make an awesome addition to someone’s family

Good news everyone! Wally got his pin out today and Dr. Mandola said his leg has healed very nicely. He was very pleased with the bone calcification and development around the break. Instructions now are he can resume regular activity. Dr. Mandola said it will most likely take several days for him to get used to walking on it and put full weight on it again, so I’ll make sure he takes it slow…I have to take him back in a week for a follow-up, to get those stitches out and remove the bandage…I was talking to Dr. Mandola about Wally and thanking him for all his work taking such good care of Wally and his willingness to help us. He in turn said, “I’m just happy you guys are saving them,” and hugged me. Really nice to hear and wanted to pass that message along to you guys.

Took Wally for his final check-up today and great news, splint is off, stitches have been removed and he’s good to start using his leg. Dr. Mandola said it’s going to take time for him to use it completely and showed me how to work his knee so he starts using it. It’s Wally’s physical therapy! He said it’s important, because of where the break was and how the leg healed, Wally has to start using it correctly and bending his knee or he won’t walk right. He does put his foot down every few steps so that’s good. Dr. Mandola said the best thing for him would be if he could go swimming but that’s not really an option now. For the most part he’s done. They closed his records and gave me copies of his info.

I can’t tell you how happy we are that Wally is better now, how grateful we are to Dr. Mandola for doing such good work and for having a good heart, how much we appreciate and value Shelley for taking such good care of him for the last few months, and for everybody who donates to our program so we can help dogs in bad shape get on the road to wellness. Wally is coming to join us at The Caroline Sessions on Sunday. I sometimes poke fun of my rescue friends who tear up at transport day or whenever we talk about the dogs we save and stories like this one. However, I can assure you that when I see Wally again this Sunday I’m going to cry happy tears for him when I hug him again and kiss his sweet nose. Here’s a short film I made about Wally. Enjoy.

We have found rescue for this little family but they cannot go to CO for about two to three weeks, which means we MUST find a foster for them. We can’t put them in boarding, because the puppies are so young and the expense would be too great. They MUST leave BARC today! If you can help by fostering them, please fill out our foster form or email us ASAP at foster@rescuedpetsmovement.org

We also pulled off a miracle and found a rescue for this sweet heartworm positive lab mix with her eight newborn puppies! However, we urgently need to find a foster for them. Boarding or kennel is NO place for them, because it’s far too risky that they’ll be exposed to something contagious and potentially deadly for the puppies. Moms with nursing newborns are easy to foster as they do all the work for the puppies. We are hoping they can leave next Thursday but I always add in an extra week just in case they need a little extra time.

This family MUST be out of BARC TODAY! If you can help by fostering them, please fill out our foster form or email us ASAP at foster@rescuedpetsmovement.org Both families will also need to be picked up from BARC, but if you can’t, am sure we can find someone to help and get them to you. Please share this with your friends. Thank you!

As we prepare another group of pets for transport, we remembered that we hadn’t shared photos of last week’s lucky travelers. It’s never too late to celebrate dogs and cats finding their forever homes! Here are most of those who made the journey last week. 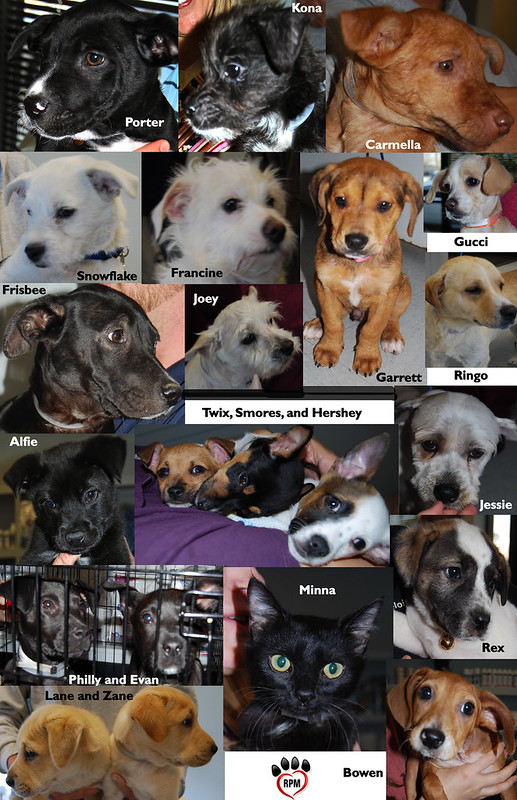 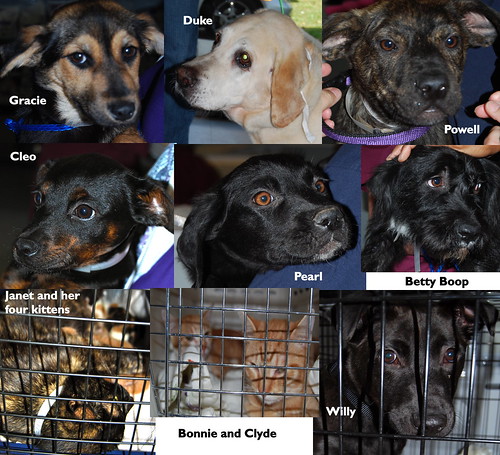 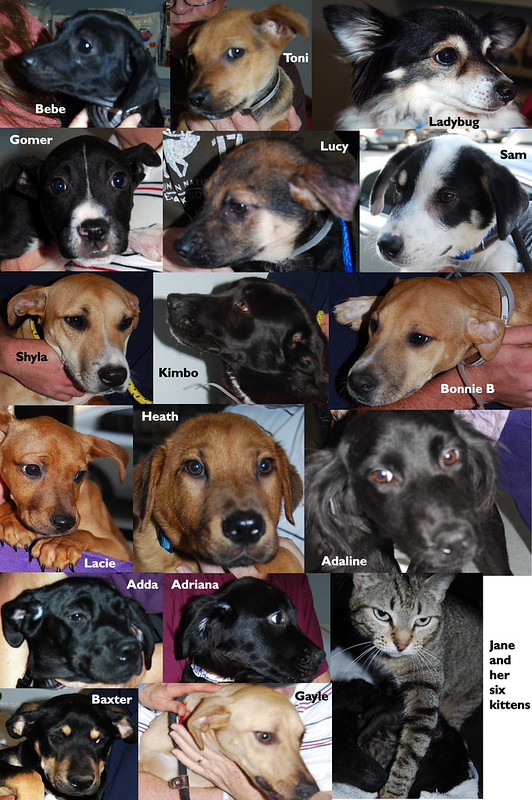 Thanks to everyone who helped! Now let’s do it again.

We hope to see you this Sunday, 12 to 5 PM, for an afternoon of friends, family, BBQ potluck, and live music by Keeton Coffman, The Willy Collins Band, Andrew James, and Tyler Newberry. The event is free, but all donations collected will benefit RPM, so we need all of you to come by and offer your support! We’ll also have some of our adoption dogs at the event. Remember, these dogs have recently been rescued from the VERY BRINK OF DEATH–was that dramatic enough?–so definitely come by and show them a little love. I’ve included photos of some of the dogs that will be there with this post, so please share this. Thank you, and see you on Sunday!

We recently received this message about Rusty, an RPM dog who was adopted last month:

Hi. Just wanted to give you a quick update on Rusty. (we renamed him Archer–“Archie.”) He’s acclimating well! Thor (the Husky) finally decided to make friends with [Archie] after his initial bout of jealousy and the two of them play happily, pulling each other by the ears and scruff. Thor is very gentle with him, he seems to know that Archie needs to gain more weight and muscle. Archie is following me around a lot, he’s very curious about everything. He caught a sinus infection and has been sniffling a bit so we keep him warm and make sure he drinks lots of fluids, but it does not deter him from exploring the house and playing with the dogs. He’s very cuddly and tries to sleep in bed with us every night. Today was the first day he spent in his (humongous) crate and he did fine, no barking (maybe because the other dogs were locked in the room with him). Right now he is enjoying the sun on the couch, I have attached a picture. I love him lots (so does my fiancé) and we feel very lucky we get to be with him. I’ll keep you posted on his progress!

Thank you again for everything you did!
Katie